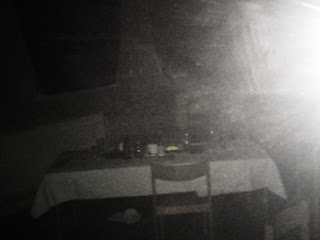 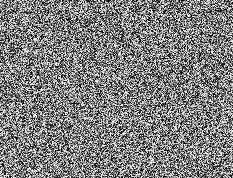 The video contains a new section with images from the mirror lounge at the theatre. The sound is processed material from the analogue recordings during the skype session. Something like morze messages can be heard there- I attempted a translation :

Making no sense and I probably gave up too soon.

White noise is like white light, all the colours are there. Pure , uncontaminated white noise, where all frequencies are given equal power, is rarely found. In the same way, pure randomness hardly exists.

White noise is a random signal with a flat (constant) power spectral density. In other words, a signal that contains equal power within any frequency band with a fixed width.
White noise draws its name from white light, which is commonly (if incorrectly) assumed to have a flat power spectral density over the visible band.
The term is sometimes used in non technical contexts, in the metaphoric sense of "random talk without meaningful contents".

The use of an FM radio tuned to unused frequencies ("static") is a simpler and more cost-effective source of white noise. However, white noise generated from a common commercial radio receiver tuned to an unused frequency is extremely vulnerable to being contaminated with spurious signals, such as adjacent radio stations, harmonics from non-adjacent radio stations, electrical equipment in the vicinity of the receiving antenna causing interference, or even atmospheric events such as solar flares and especially lightning.

Pink noise or 1/f noise (sometimes also called flicker noise) is a signal or process with a frequency spectrum such that the power spectral density (energy or power per Hz) is inversely proportional to the frequency. In pink noise, each octave carries an equal amount of noise power. The name arises from the pink appearance of visible light with this power spectrum.


In science, Brownian noise, also known as Brown noise or red noise, is the kind of signal noise produced by Brownian motion, hence its alternative name of random walk noise. The term "Brown noise" comes not from the color, but after Robert Brown, the discoverer of Brownian motion.
The graphic representation of the sound signal mimics a Brownian pattern. Its spectral density is inversely proportional to f², meaning it has more energy at lower frequencies, even more so than pink noise. It decreases in power by 6 dB per octave (20 dB per decade) and, when heard, has a "damped" or "soft" quality compared to white and pink noise. The sound is a low roar resembling a waterfall or heavy rainfall. See also purple noise, which is a 6 dB increase per octave.


Violet noise
Violet spectrum (+6 dB/octave)
Violet noise is also called purple noise. Violet noise's power density increases 6 dB per octave with increasing frequency(density proportional to f 2) over a finite frequency range. It is also known as differentiated white noise, due to its being the result of the differentiation of a white noise signal


Grey noise
Grey spectrum
Grey noise is random white noise subjected to a psychoacoustic equal loudness curve (such as an inverted A-weighting curve) over a given range of frequencies, giving the listener the perception that it is equally loud at all frequencies. This is in contrast to standard white noise which has equal strength over a linear scale of frequencies but is not perceived as being equally loud due to biases in the human equal-loudness contour.

I was unable to travel to the site of the project Spiritual Telegraph in Sollefteå. Instead, in the early hours of 24th February a skype session was carried out- Björn Eriksson was recording there. After the presentation and contact request a carrier wave was emitted from an analogue signal generator and radio between the stations. The same kind of sounds as in the previous, digital recordings registered. I have no access to the tape yet, but just got a digitalisation to listen through on headphones.