link between ears and feet- let the sound guide you

Cats and bats navigate with the help of sound. People follow blindly the call of desire and nothing is more zombiefying than a pair of high heels.Who cares if they hurt if they look gorgeous and if they don't hurt they don't work... A state of being in love turns you into a zombie wandering in erotic trance and since PDX Cacophony Stumptown Lodge-Portland section of Cacophony society, a random network of free dada spirits, converted Valentine into V-Day Zombie Pub Crawl (Z-day), it is only right thinking of a zombie as a romantic creature. Halfways between life and death, as an enamoured bride, and unresponsive to what the Germans call weltschmerz or pain caused by being in the world, my ballet zombie is shuffling and staggering towards the source of music, never leaving the flow of sound, because leaving it means awareness, letting the sound go from your ears to your brain, which we are trying to avoid in the current project(we let it go to your feet). Not very difficult, by the way, as both the harmony and timbre are simple,travelling easily to the core of emotion. In this way the dancer is invited to die for one kind of pain and wake up to another in her sonic presence. And as we have built-in trumpets inside our ears that play differently in response to music, the phenomenon called otoacoustic emissions (OAEs),the experience of sound will be different. The question is now if the clashes on the floor and the prescribed ear-to-ear contact will cross the line between the self and the other through sharing of something unique, comparable to finger prints, even if the tones can be difficult to detect, or only make you believe you are dancing/walking to your own tune.

Some useful links on OAEs:

On cochlea as an imaging system and recording otoacoustic emissions:
http://bmb.oxfordjournals.org/content/63/1/223.full

http://www.youtube.com/watch?v=qshHYscbw3A
Posted by Natalia Kamia at 01:34 No comments:

I live in Docksta now, then I'm a dockstader 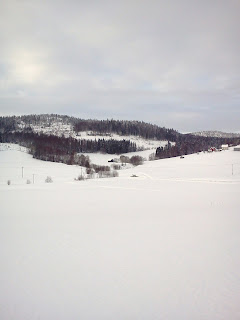 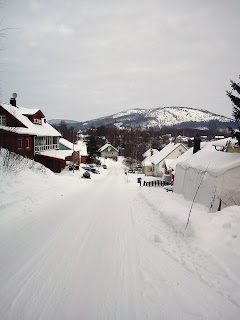 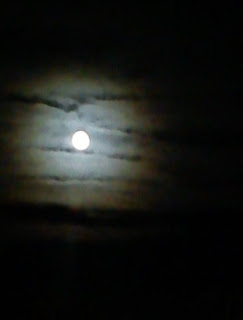 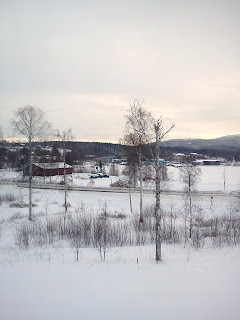 Sergey Maklakov aka jucumari (my second digital persona along with Sabine Schmuts) relocates in Docksta, an alpine village by the sea in High Coast area of Sweden, to bring the idea of customized spacetime closer to the level of experience.

It is still unresearched whether there is any link between Dockstader ( with his origin in Minnesota) and Docksta, neither if the relocation means optimal living environment as is promised by the stars. Anyway, I hope that something of the beauty of the two will rub off on me.

Every single day, before I got my internet connection, I was wandering in the snow and taking pictures of the birch-tree outside my window. My room is facing the bay that is frosen now and white as everything else, only the surface betrays that it is the sea. Much more skies and stars here, Orion hanging over E4 road.The birch is dead on her left side and alive on her right, which makes her a Negarestani birch. The tenants of the house want her out of the view, but the owner can do nothing about it- she stands on someone else's land. So, she is enjoying the protectedness of a diplomat while being an untouchable and outcast, and persisting in her survival . If I see some young leaves on her when spring is coming to our severe "neider", everything will be OK.
Posted by Natalia Kamia at 22:57 No comments: